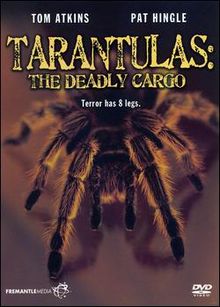 Tarantulas: The Deadly Cargo (1977) I had to kick off the tarantula triple feature with a good movie; that’s why I kept Tarantulas: The Deadly Cargo until today, because I’ve had a hunch, ever since first purchasing this movie on DVD many years ago, that it might turn out to be a web of worthlessness. Finally, after years of wondering, I popped in the disc and gave it a watch. I wish I had a happier report on what I saw.

Some shady dudes take a plane full of coffee beans out of South America back to the United States, and it’s shown in the opening that some tarantulas got shovelled into the coffee bags and stowed aboard, along with some illegal immigrants, who hide out in the cargo bay just as the plane takes off. The plane flies into a storm, and the spiders get out, attacking the stowaways, who fight back against them like little kids, screaming and hitting them with their shoes. Soon all the stowaways are sick, and the plane malfunctions, so the two shady dudes are forced to call for help and make an emergency landing. The people they contact phone up a local doctor, who says, and I quote, “I don’t practice medicine anymore.”

Tarantulas : The Deadly Cargo is best summed up with one word : mediocre.

Within fifteen minutes, I got the impression that it was a made-for-TV production, and it turned out I was right.

At times, this movie moves so slow, it is coma inducing. I think the spider’s venom works faster than the speed at which this movie moves. It doesn’t help that the plot, characters, dialogue, music, and more, is all…blah. It’s not all horrible, but nothing is anywhere close to great.  They’re run-of-the-mill, slow-crawling, silent, tarantulas. Not giant, not mutant, nothing special like that.

The filmmakers really played it safe, which isn’t too surprising given the restrictions likely put on them by the TV network. The expression “meh” is applicable here, indeed. But, as much as this movie was “meh”, it wasn’t completely devoid of what could be considered good elements.  ดูหนังออนไลน์